Kevin Vallier (founder and editor in chief of The Niagara Independent) 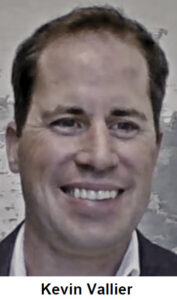 Duncan McLaren introduced guest speaker Kevin Vallier the founder and editor in chief of The Niagara Independent, an online newspaper which is distributed to subscribers twice a week.

Kevin, a native of Sarnia who graduated from Brock University in Human Relations, spent about 20 years in public relations working with the St. Catharines Stompers baseball team, Shaw Festival, and the former Hotel Dieu Hospital. While doing public relations consulting, he sensed the opportunity to develop an alternative news source in the Niagara area where there is a monopoly on all print media.

Kevin said that his goal was to offer a pro business and pro Niagara point of view and to highlight business success stories which might be overlooked by regular print media.

He advised that it is important for people to look to more than a single source for their news. He pointed out that all media sources have certain biases and illustrated the point by showing vastly different headlines that appeared on identical stories in two Toronto newspapers.

Kevin said that even during the current pandemic situation there are instances of businesses doing well. He added that he feels businesses need to adapt to conditions and not rely on government support if they are to prosper.

Each issue of The Niagara Independent includes stories covering local, provincial, federal, sports, business and opinion. Kevin writes most of the local stories himself while a group of regular contributors fill out the other items.

After about two and a half years of operation, the Independent now has 12,000 subscribers. Copies are emailed to subscribers free of charge on Tuesdays and Thursdays. The paper is also available on Facebook and on the website. Kevin said that the paper generates revenue from advertising, donations and some Google ads.

With the success the online paper has enjoyed in Niagara, Kevin is exploring expansion into the KitchenerWaterloo and London areas and perhaps even into the United States.

Duncan McLaren thanked Kevin for providing a look into this aspect of the information age.