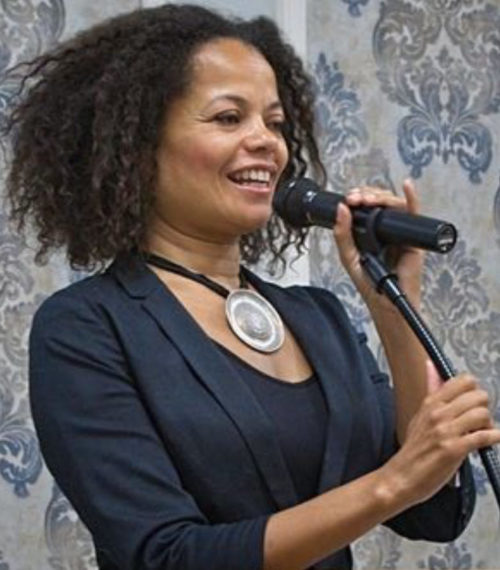 Juliet, who has an impressive musical career in her own right, gave an informative and lively talk about the non-profit organization and the more than 50 shows and events which it stages during the year to promote jazz and jazz musicians.

Juliet spent 13 years in Paris, France before returning to Canada. She spent two years performing with the Shaw Festival, formed her own jazz band and, with husband and musical partner Peter Shea, performed as a lead jazz vocalist around the world.

The idea for the Niagara Jazz Festival evolved and rap-idly grew. The first annual festival was held in 2014 and in its fourth year it won the award as Best New Festival in Ontario.

The festival brings Canadian and internationally acclaimed jazz musicians to Niagara with con-certs, educational initiatives, activities and free events. Each year the festival has continued to expand with events such as the youth program called Jazz 4 the Ages and a world music event called World Music on the Beach.

This year’s lineup includes Niagara’s Summer Mardi Gras in Port Dalhousie and World Music on the Beach at Lakeside Park in July.

Juliet said that the Festival partnered with the Performing Arts Centre to present the Music of a Charlie Brown Christmas. A Live, Learn Jazz series is scheduled for those interested in learning more about jazz music in a fun atmosphere such as at various local wineries.

You can find out more about the festival and the many events scheduled for this year by going to www.niagarajazzfestival.com