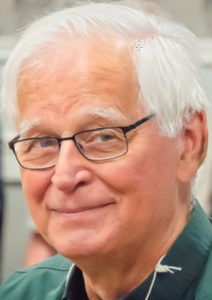 Russ Milland goes in search of the Newfie Bullet

Russ gave a very interesting and lively travelogue presentation titled “In Search of the Newfie Bullet”
based on his trip to Newfoundland and his search for stories and remains of the Newfie Bullet passenger train.d took 5,600 photos during their 2013 visit.

The trip wasn’t all about trains and Russ showed pictures of some of the high-lights and points of
interest in the St. John’s area including such things as Signal Hill, the Coastal Railway Museum, The Battery and Quidi Vidi.

Russ pointed out that the Newfoundland narrow gauge railway was completed in 1897 and ran until 1988 – the longest narrow-gauge railway in North America. The choice of a narrow gauge
was a cost-saving measure. When Newfoundland joined Canada in 1949 the railway
was taken over by the CNR. The Newfie Bullet ran between St John’s and Port aux Basques, a distance of 548 miles with a travel time of 28 hours in 1900 and 23 hours in 1969. The railway was given its nickname during World War II by American soldiers because of its slow speed.

Russ had a list of nine locations of locomotives to view and was able to visit four of them including
the museum at Corner Brook where he viewed steam locomotive No. 593 which went
into service in the 1920s. It is one of nine preserved locomotives. CNR
sustained heavy losses for many years running the railway and in 1988 the
Federal government offered Newfoundland a new trans-Canada highway in exchange
for the railway. The old railway bed has been converted to a 549-mile walking
trail named T’Railway Provincial Park.

Russ also recommended many other places worthy of a visit such as Gros Morne National Park, L’Anse aux Meadows, Fogo Island and Quirpon, a small island in the far north which features a lighthouse and a bed and breakfast.