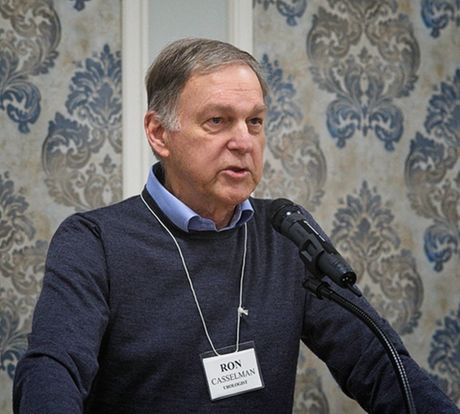 Ron, who admitted that he was never a hunter, said he got his first decoy back in 1977. He went on to describe some of the characteristics, history and investment value of decoys.

The history of decoys goes back thousands of years. Ron said that North American natives made decoys, they were used in early Egypt and in 1928 a discovery in Arizona indicated that decoys made of reeds and mud dated back 2000 years.
Ron said that harvest-ing of waterfowl was big business especially along the eastern seaboard of the United States and thousands of migrating waterfowl were harvested along the Atlantic flyway.

The interest in hand-carved decoys grew especially in eastern Canada and the U.S. He pointed out that there are two basic styles of decoys – dabble and dive – and they can be either hollow or solid. To be of value to collectors, decoys must closely simulate the real things without necessarily being a perfect match. 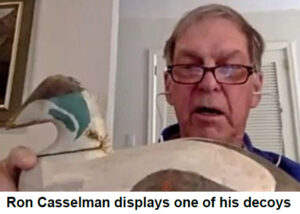 In recent years the investment value has grown to the point where decoys appreciate at 10 to 15 per cent each year. Ron said that Joel Barber, the first decoy collector, wrote a book in 1934 and an original edition signed by the author was solid at auction for $9,000 in recent years. The record price is $860,000 for a decoy purchased 12 years ago but many older decoys are valued at three to five thousand dollars.

Ron said that Canadians were slow to recognize the value of decoys and many were bought by Americans. However, there is now great interest especially in Ontario and the Maritimes and the Lunenburg and Mahone Bay are-as are recognized for high value decoys.

An auction house in the United States, Guyett and Deeter, specializes to dealing in waterfowl decoys.
Ron said various decoy shows are a great place to learn about decoys and collecting. He said form, original paint and age are key factors in evaluating decoys. He advised that anyone interested in get-ting into the field should do their research and specialize in certain types. He also warned that there are great fakes that could look like the real thing but without the value to a knowledgeable collector.