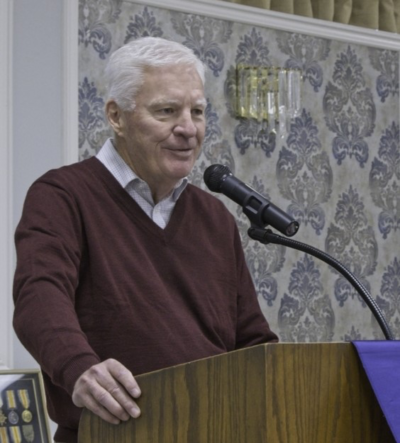 Bob Halfyard introduced guest speaker David Cowan, a well-known organist in Niagara, who was appearing in his role as President of the Friends of Beaverdams Church. David, a native of Thorold, illustrated his talk about the historic church with pictures showing various stages of the restoration work done over the past seven years.

Providing some background, David said that the church, a clapboard two-storey building, was built in 1832 in the New England meet-ing house style. The original congregation was Methodist Episcopal and most members were Loyalists from New Jersey who arrived after the American Revolution. The first minister was Dr. Egerton Ryerson, the founder of Ontario’s education system.

David said that the church boomed until the building of the second Welland Canal that left the church somewhat isolated and the congregation dropped to about 25 members. In 1879 the interior was altered to make it suitable for a public meeting place. In the period from 1890 to 1987 the building was used only for a Sunday School.

In 2008 the building was sold by the United Church of Canada to Thorold for $1. In 2013 the Friends of Beaverdams Church was granted Non-Profit corporate status under the umbrella of the Ontario Historical Society. The following year the group purchased the church and cemetery from Thorold for $2.

A new, historically accurate, metal roof was in-stalled in 2015 and work was started on the resto-ration of the original foundation which involved rais-ing the building, installing concrete blocks and fin-ishing it off using some of the original rubble stone.

The next major project involved replacing 26 windows that were custom made to match the orig-inal 1832 style. The exterior clapboard siding was then replaced giving the building a like-new ap-pearance from the outside.

David pointed out that much work remains to be done on the inside. All that work does not come cheaply. David said his group has raised and spent more than $250,000 so far and the total restoration could eat up another $300,000.

The building, on Marlatt’s Road in Thorold, enjoys both municipal and provincial heritage designation.
Future uses will include weddings, art shows, smaller concerts and historical and heritage events.
If anyone wishes more information about the project they can check out the website at http://friendsofbeaverdamschurch.com

David was thanked for his presentation by Bryan Brodie.