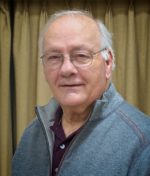 My name is Tim Dunn and I am a St. Catharines native, born and bred, except for the fact that my Dad worked for the Merritton Lions Club, running their pool in the summer and the Community Cen- tre bowling alley for the rest of the year. Then Mer- ritton seemed like home.

Discounting my undergraduate work at Western, an M.S. from Buffalo State and ignoring the 30-plus years as a high school English teacher, five as De- partment Head, I found my true roots belonged in sports. I blame that on my Dad, Bob Dunn who had been a professional long-distance swimmer during the Dirty 30’s. Dad became the head swimming instructor and life-
guard at the new YMCA on Queen Street at age 19. More to the point, Dad had two boys competing at various swim
events from the age of 5 onward. Trying to win for my Dad became a big motivation; alas, I inherited his body so became a miler by age 12...gave that up at 14 because one of my Dad’s proteges, a girl, beat me consistently.

I had tried Legion baseball for four years. Coaches saw me as the fat kid who couldn’t run, and I gave that up to play football in high school. On my second year of football, my teammates voted me defensive captain and the school won the Junior SOSSA football title that year.

Grade nine also introduced me to rowing. I was the only Grade niner to make the varsity eight. And the new board agreed to sponsor our crew to com- pete at the American Scholastic Championships to be held at Princeton University that year. WOW! Princeton! Travel! What a sport! I was hooked.

As further incentive, four boys from my school and Grantham High had won the right to compete for Canada in the 1960 Olympics in Rome. My goals now became lofty – to go to university on a rowing scholarship and to row for my country in the next Tokyo Olympics. I thought we had made it too in 1963 when my junior heavyweight crew won the Canadian Schoolboy, also the Calder Cleland race for the heavyweight high school crews at Henley and won the Junior Heavy Eights race in record- setting fashion at the Royal Canadian Henley Regatta.

Then it happened. The greatest lesson ever learned from rowing: when to quit. I started to real- ize that guys were ready to give up their chance to go to university for a chance to row in a five-minute race; coaches were giving up their marriages be- cause his dream was not her dream. That was nuts! I was nuts!

It was my Grade 12 year and I lucked out by being hired as a summer replacement at the Ontar- io Paper Mill in Thorold South. That job lasted four years and paid for university. I also lucked out about my dream to go to Cornell University on a rowing scholarship. That summer I drove down to Cornell to speak with the rowing coach. He had eight crews of eight to build one for racing. Scholar- ship moneys decreased rapidly depending upon which crew you were assigned. Message received!

I would be attending the University of Western Ontario where three years of tuition was the same as one semester at Cornell.

In my first attempt at Grade 13 Ontar- io Departmental Exams I bombed horri- bly. Ironically, things were starting to turn around. At my first weekend back at high school I met the future Mrs. Tim Dunn, a student nurse, at my one and only blind date. It was for Mary Ann’s sake that I now became an “A” student and was accepted into five universities. Three years hence, with my new bride, I completed my undergrad work while Mary Ann became a scrub nurse in the O.R. of St. Joseph’s Hospital in London. I took my first teaching job in Exeter.

I tried to get back into rowing by of- fering myself as a coach to the London Rowing Club. I was instantly the 135-pound and 145-pound coach. It so happened that they already had a lightweight cox-four crew that had been together for three years. All they needed was some tinkering and new motivation to become London Rowing Club’s first gold medal crew at the Royal Canadian Henley Regatta.

Coaching aside, 1968 was also the year that my mother spent 10 months in hospital either in St. Catharines or in Toronto. We were on the road each weekend to see her — very stressful! After my year in Exeter, Mary Ann, now pregnant, and I moved home to Niagara. I spent the next 18 years teaching English, five as Department Head at Niag- ara Falls Collegiate and Vocational Institute. Mary Ann then worked at the hospital until son Sean was born. Fifteen months later, son Bob was born. And Heather surprised us five years later.

I gave up my Department Headship at NFCVI for a chance to teach the new Grade 12 course in Creative Writing at A.N. Myer Secondary School. During my first year at Myer I started a rowing pro- gram, the first ever in Niagara Falls. During my 10 years involvement, Myer kids won seven national titles.

In 1999 I had some medical problems which led me to retirement.